Fella is the official mascot of DeviantART, described as a "robotic cat". Fella was created April 30th, 2001 by switched who submitted his design to a mascot contest. He is seen looking through folders, acting confused when you are redirected to a page that is not found, and seen shedding a tear when you go to a deactivated account. He is used all over the site and his metalic green colouring has now become the staple of the site, displayed to millions of members, he is commemorated throughout the site and is shown in many places. He helps boost community spirit and is used as a sign of authority.

The deviantArtGEAR shop sells a Fella plushie, and two packs of stickers both including a Fella sticker. Along with the Fella plushie, Deviants can also choose to buy the Super Llama plushie who is described as deviantART's secondary mascot, or more commonly, Fella's sidekick.

Fella was created on April 20th, 2001 by `Switched who uploaded an animated Deviation that was submitted to a mascot contest and later won. Later that year, on December 6th 2001 the group #Fella was created and was used to host images and Deviations related to the mascot, and not only that, but helpful advice for a smooth ride to the site. Although the group is more than ten years old, there is no record of journals until around 2009, starting with news of the Staff World Tour, and a link to #HQ for more information. This is probably due to the fact that group features were not well enough developed, as suggested by their second journal titled "L" where Deviants were experiencing bugs and didn't understand much.

#Fella  then used their mascot to advertise deviantART's 9th birthday and several other events, including the going-on's at #CommunityRelations and #HQ.

On April 1st, 2012, as an April Fools joke, there was an invasion of Cats that had invaded the deviantART HQ, tied and Staff up in the closet and captured Fella. This was the #FUR Invasion. The cats needed a specific amount of Deviations submitted to the Free Fella category. This was explained in the "A Message From Your Feline Overlords " journal, and the site was covered in Manditory Cat Education and Trivia.

The feedback to the project was generally great, and Staff received more than enough entries to the category and Fella was eventually set free. Any Deviant that submitted to the category was also rewarded with the "Cat Badge ", which was one of the main inspirations and goals of many Deviants to get as many people enjoy the site badges.

The original colour palette was much darker in Fella's original design and he has a tattoo bolted across his chest that was simply the logo of the site. Fella's body has also become much more slimmer and oval-like compared to the original circles, which also apply for his hands, as they were originally just circles too, but were redesigned to match his feet bu giving the circles stubby-round fingers and smaller balls that represent his wrists, similar to the round ankles he has which were apparent in his original design and have remain unedited. Fella was also given a mouth, reshaped eyebrows and a lighter overall body colour, unlike the original design which changed depending on the section of Fella's body.

The #Fella group is one of the longest running groups on deviantART and can be contributed to by most every Deviant who joins. The group particularly is to celebrate and collect art of their mascot and generally spread the Devious ideas. On the group page itself, Fella states in a speech bubble that it is his mission to help Deviants have a pleasurable experience on deviantART. He also states that the group of staff for the group help him do it, and he refers to them as his friends. 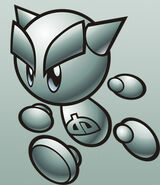 "Fella Around The World" contest badge

DeviantART 500 Internal Server Error page
Add a photo to this gallery
Retrieved from "https://deviantart.fandom.com/wiki/Fella?oldid=18808"
Community content is available under CC-BY-SA unless otherwise noted.